A gentleman (43y) came in to my office a couple of weeks ago complaining of acute lower back (lumbar) pain which radiated down the lateral side (outside) of the left leg (I/T band). He described stabbing pain, level 8 (1-10 scale). This had happened a year ago. After an acupuncture treatment from a colleague the pain resolved until this recent episode.

Discussion of Back Pain Acupuncture Treatment

I used balance method acupuncture points in his right hand. The 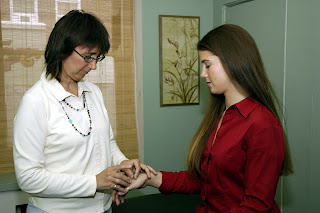 pain reduced immediately upon insertion of the needles. While he rested with the needles in place, I made up a custom herbal formula to circulate blood. In TCM (Traditional Chinese Medicine) theory, stabbing pain is due to blood stagnation, or poor blood circulation in the area. In western medicine, the radiating pain indicates possible nerve impingement, likely caused by a disc protruding and pressing on the nerve root. He had not had any imaging of the area.

He returned 3 days later for follow up treatment. The pain had much improved. It was no longer a stabbing nature. Now he experienced mild stiffness in the morning with no radiating pain. I repeated the acupuncture treatment in the hand and changed the herbal formula. As the stabbing pain had resolved, i gave him a formula improve qi circulation in the area. The stiffness indicated the qi was not moving in the acupuncture channels of the lumbar region.

A year or more later I received a referral from this satisfied patient. When I thanked him for the referral I asked about the back pain. He told me he’s been fine ever since.

This is what I hear from my pain patients. “Believe me, if I had pain, I would have called you”. So like the Maytag repairman in the old ad, once patients finish treatment, I rarely hear from them.

Dr. Oz: Why He Likes Acupuncture