I attended a Pema Chodrum retreat this weekend entitled “Living Beautifully with Uncertainty and Change“. Ane Pema, if you don’t know, is a celebrity Buddhist nun and inspirational speaker who has written many popular books about adapting to and handling the troubles life brings. During the weekend retreat she offered many pearls to help one adapt to the curve balls life throws at us.

Ane Pema began the weekend Friday night with a metaphor about the river of life. She explained that our tendency is to seek the safety of the shoreline 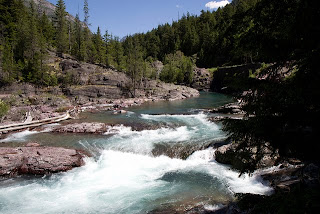 . However our mistake is in our grasping to hang on to the perceived security there. Life, she continued, takes place in the flow of the river, and we can’t be afraid to jump in. She could not guarantee that in the river we wouldn’t get banged up a bit, repelling on boulders and trying to keep our heads up in the rapids. but the river is where life happens, and where growth occurs. Clinging to the shoreline inevitably causes suffering and pain. We most certainly will get bruised and our hands and arms will get weak in our attempts to hang on to the branches to keep from becoming swallowed up by the flow of the river. On the shoreline we are stagnant. In the river, we move forward wherever life takes us.

Saturday morning Ane Pema opened with an exercise. She asked us to to remember an interaction that involved difficult feelings and pain. Not an incident that was a 10, but something smaller, a 2-3 (on a 1-10 scale). And to think about the incident and to feel the negative emotions that arose during the uncomfortable situation. Next to ask oneself who is in control here? Are the emotions in control of oneself, or am I in control of the emotions? And to remember this when difficult situations arise triggering negative emotions: who is in control? not to allow the emotions to control us, especially not to allow the negative emotions that often rapidly arise to cause us to do or say something unskillful that would cause pain for ourselves or others.

As we got in touch with the negative emotions and the pain the situation caused us, we ask the emotion to stay while we feel the intensity of the pain and ask ourselves “do i want others to experience this pain?” “do i want to do or say something that would cause this type of pain to arise in others?”. its a compassion practice. in answering the questions, we remember in the future to pull back when triggered by negative emotions. “who is in control here”? so that we don’t react and unwisely do or say something that will escalate the situation and bring more pain and suffering to oneself and others.

Its a high spiritual task, that requires putting the matter in which we deal with a situation ahead of the principal or substance at stake during times of conflict.

After lunch Ane Pema began by talking about charnal ground meditation. Tibetan Buddhists have something called a sky burial practice. Because of the permafrost in the Tibetan mountains, the ground is too hard to bury bodies, and there is not enough fuel to cremate the bodies of all of the dead. So the Tibetan Buddhists began a rite of sky burial. Apologies in advance for the graphic description of the practice here. The Tibetans put the bodies on a high mountain peak for the vultures to take away. But because you wouldn’t want the vultures to drop grandmas leg bone in farmer Jone’s field, the monks first cut up the bodies into small pieces. The sky burial site is called the charnal ground.

As you can imagine, the charnal ground is not a pleasant place to hang out and during warmer weather is rather unappealing to the nose.

The monks developed a meditation practice called Chu practice, where they go to the charnal grounds to meditate on the strong emotions that arise while being there: aversion, fear and so forth. They watch the emotions arise to examine the emotions: where and how do they arise? how do they feel? are they solid? and do they dissipate? they do this Chu practice to learn how to deal with arisal of negative emotions.

Ane Pema emphasized that you have to go to the charnal grounds and sit amongst the cut up bodies to do this practice. you can’t do it by imagining the charnal ground, or going to a serene cemetery with the neatly mowed grass and tombstones with bouquets of flowers lined up in orderly rows. you must do it in the gruesome surroundings on the charnal grounds to fully feel the emotions that arise in that place.

So Ane Pema suggest to let life and the fear that arises during uncertainty be a charnal ground practice. When the fear arises, sit with it, examine it, and watch it as it grows and subsides. Ane Pema pointed out that the emotions cannot exist without a story to feed them. Take away the story and the emotions dissolve. We feed anger with our story of righteous indignation and morality plays of right and wrong. We feed hurt with stories of victimhood or neglect, rejection and so on. We feed anxiety with stories of loss, lack (of security), and helplessness. Take away the story and the emotion dissipates. To take away the story, one must discipline one’s mind through meditation not to keep thinking the repetitive thoughts, to stop obsessive thinking.

And one must let go of the shoreline and not be afraid to jump into the river. To do this, one must accept that in the river suffering is inevitable and we do get hurt. But grasping and clinging to the shoreline is not an effective method to avoid life’s suffering. Grasping, clinging and attachment to the security of the shore only produces more suffering. Living in the river is a charnal ground practice. the pay off is liberation. KB

Your Body is Your Garden: We Must Cultivate Our Health