Gou Ji berries have become a health trend in the past few years. These small red berries were plucked out of Traditional Chinese Medicine’s (TCM) Materia Medical (catalogue of herbs and other medicinal substances, like shells and animal products). I’ve seen it included in a range of products and snack foods, such as smoothies and trail mix. Their popularity has shot up the price and reduced its availability. Lately I have discovered that several of the natural food stores in Asheville, NC are not able to obtain it for their shelves. But contrary to popular belief, this tonic herb should not be used for general consumption.

In Chinese herbal medicine, Gou Qi Zi, Lycii Fructus (lycii berries) tonifies Liver and Kidney yin and blood and brightens the eyes. Yin and yang are polar opposites and in Chinese medicine we use the concept of yin and yang to help explain and treat disease processes in the body. Yin refers to female, quiescence, cool, darkness, earth, feminine, night, moon and water. In the body, substance and blood are yin.

The kidney organ system in Chinese medicine house the root of yin and yang in the body. It also rules the aging process, from conception, through puberty and maturation, as well as decline until eventually we die because the kidney energy has exhausted itself. 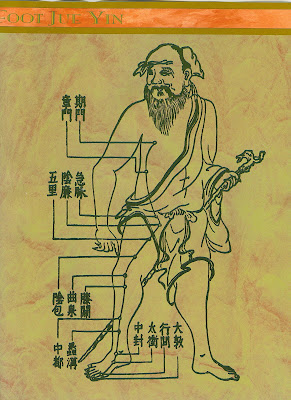 The liver in TCM stores blood. For women, at the time of the menses it sends the blood down to the uterus to be expelled. The liver channel begins at the big toe and travels up the inside of the leg, through the genitalia, up the side of the torso to the chest. Then it goes internally up to the eyes and top of the head.

Gou Qi Zi nourishes the qi (energy) and blood of the liver and kidneys. We use it for gyn issues involving deficiency and to tonify the liver and kidney systems when they are weak. It is a commonly used herb for those undergoing radiation and chemo therapy, which burns yin and blood.

In Chinese herbal medicine, we classify herbs according to their temperature. Cinnamon, cardamon, nutmeg, cloves and Sichuan pepper are all warming herbs. Mint and watermelon are cooling. Generally speaking Gou Qi Zi is considered a neutral herb: neither warm nor cold. Of interesting note is a personal antidote mentioned by Zhang Zi-Chun in Essays on Medicine Esteeming the Chinese and Respecting the Western. As a neutral herb, Gou Qi Zi is not considered to have the ability to clear heat. However Zhang disagrees, citing a personal experience when he was waking up feeling hot and drinking a pitcher of water throughout the night. He began chewing 30g of Gou Qi Zi before bedtime. He continued to waken during the night, but didn’t feel warm and he reduced his water intake by 50%. (1)

This scenario is commonly seen in perimenopausal women. Traditional Chinese herbalists often include Gou Qi Zi in formulas when treating perimenopause to tonify the kidney yin. This example may show some ability of Gou Qi Zi to clear heat for these women. I frequently use the root of this plant, Di Gu Pi, Lycii Cortex to clear heat for hot flashes.

Because it goes to the eyes, Gou Qi Zi is commonly used for eye problems due to deficiency, such as weakness, floaters and blurred vision. For this purpose, a tea can be made with Gou Qi Zi and chrysanthemum flowers (Ju Hua), using a 10-25 berries and a few dried blossoms. Gently simmer in filtered or deionized water for 10-20 minutes and drink 1-2 cups daily.

Ron Teeguarden notes that good quality berries are thick, bright red, sweet and tender. If they are brownish or dry and crunchy they have been stored too long. (2) The berries can be added to soups, stews and grains, up to a handful per day. Be sure you have blood and yin deficiency before using, by checking first with a traditional Chinese herbalist. KB