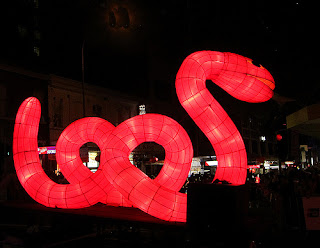 Wikipedia tells the story of the order of the Chinese zodiac signs:
According to one mythical legend, there is a reason for the order of the 12 animals in the 12 year cycle. The story goes that a race was held to cross a great river, and the order of the animals in the cycle was based upon their order in finishing the race. In this story, the snake compensated for not being the best swimmer by hitching a hidden ride on the horses hoof, and when the horse was just about to cross the finish line, jumping out, scaring the horse, and thus edging it out for sixth place.
The snake symbolizes transformation: shedding of the skin, so expect some changes this year. Stephanie Dempsie notes on Huffington Post.com that it is important to do your research prior to making any big decisions during Snake years, as things are not always what they seem to be on the surface.
The water refers to the five element system, which we also use for diagnosis in Chinese medicine. The five elements are earth, air, water, fire and wood. The Chinese zodiac moves through these five elements. So one year is the water snake, another is the fire rabbit, and so on. You might think of water as a modifier to the zodiac sign.
The Taoists respect water for its ability to adapt and transform. It can be hard, as ice and break objects, such as rock. Or mutable and flowing, like a river and move around obstructions, like boulders. Water teaches us to be flexible in approaching the challenges that life presents.
Gung Hay Fat Choy
Photo: newtown grafitti, flickr Creative Commons 2.0

Acupuncture and Chinese Medicine for Patients with Blood Cancers